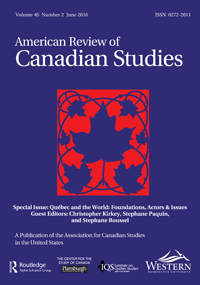 The objective of this article is to propose a periodization of the international policy between Quebec and the United States focusing on two levels of analysis: The first level is interested in public policy instruments such as the opening of delegations, while the second focuses on the paradigm of state action. From these two main criteria, I propose an analysis of five periods. The first period (1867–1960) is characterized by the absence of a structured paradigm and the virtual absence of diplomatic instruments with the exception of a tourism and trade office in New York. The second period (1960–1976) reflects a desire by Quebec to develop a larger presence in the United States with the creation of many instruments, as the public policy paradigm is gradually being built. The third period (1976–1980) is characterized by Quebec sovereignists’ awareness of the importance of the United States. This period is noted for a significant paradigm shift. The fourth period (1980–2001) is marked by the turn toward free trade. The last period (2001 to present) is characterized by the importance of new challenges that extend the public policy paradigm to issues such as security in the 9/11 environment, as well as to energy and environmental issues.